Since last year, it has been too dry and hot in large parts of Germany, although at the start of May, when the oilseed rape was flowering, it was cold and frosty, which means that pod-setting suffered. Then there was the heat wave at the end of June, right in the middle of ripening. Yields have often been between 35 and 40 dt/ha, so considerably better than last year and in the range of the long-term average yield, but not the expected massive improvement. More had seemed possible.

Prices have stabilised slightly during recent months but are still below the psychologically important 40 €/dt line . This explains why the mood continues to be rather sober at the moment, although prospects for the upcoming oilseed rape seeding are definitely positive: 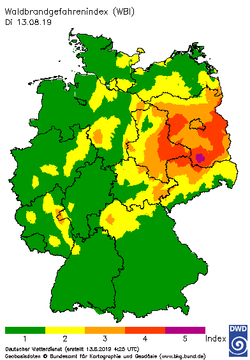 Although the current drought in many regions continues, a different level of soil humidity is apparent in the fields this year. There is no water in the subsoil. However, at least in the crumb level, the supply of water to soils in the north and south and, in some cases, the west, is good at times but at others is barely adequate, depending on storm precipitation. The weather is moderately warm, without a heat wave, so the air humidity is high and there is dew formation. Unlike last year, weeds, volunteer cereals and oilseed rape are emerging after stubble management.

A view at the map of forest fire risk levels clearly shows that drought in the top soil is most prominent in Saxony-Anhalt and Brandenburg. If it continues to be dry, these will also be problem zones for the upcoming seeding.

Previous reports from the field have been contradictory, and vary according to soils that respond well to tillage and soils that are hard and heavy. Therefore, the decision regarding when, how deep and using what method the soil should be worked must be left to the individual farmer. If there is moisture, then usually at the surface.

The winter barley has been quickly cleared away and, despite the large amount of straw, this should be well worked in and pre-rotted. Otherwise, during tillage there is a risk that working large amounts of straw into the deeper subsoil will lead to dry soil being brought to the surface. During hot weather, postponing soil preparation and seeding until night-time or early morning can be beneficial as it minimises unproductive evaporation.

Germination is the period of highest water requirement during plant development, although oilseed rape is very frugal in this respect. Unlike last year, there is currently more humidity in the air even without precipitation, as the balance between the soil and air humidity is being maintained, and this has a positive effect on the seedbed. If dew forms during the night, this always draws some moisture into the soil, which is sufficient for the oilseed rape seed to survive as long as the roots can find sufficient compacted fine soil below. The conditions for seeding are, therefore, often even better this year than last year, despite the dried-out soils.

However, if precipitation is scarce up to early/mid-September, a proportion of the oilseed rape will not even be seeded, as happened last year. Had too much oilseed rape in the crop rotations been discussed two years ago, then some regions in the arid areas of Brandenburg and Saxony-Anhalt would have stopped growing oilseed rape altogether for the second year in a row – which would have had knock-on effects for beekeeper.

As the available soil moisture is limited, it must be used to its fullest extent. It is important not to mix the soil when working it, as this moves more dry earth to the seedbed. Particularly when plough sowing, the act of ploughing up the dry soil can present problems if it does not rain afterwards or there is too much rain. Good compaction and sufficient fine soil are important to ensure the seeds have access to capillary water. The seed should be set 1-2 cm deeper at 3-4 cm. The quality of the sowing depth and compaction has to be exactly right.

When no moisture at all is present in the entire seedbed, then the practice of very flat surface sowing in the dust, as used in autumn 2018, has greater success. During that period, rather than the extensive precipitation predicted by the weather reports, only a few litres/m² rain fell locally or even none at all in some cases. The sandy soils and flat planting gave the best field emergence. Even low levels of precipitation penetrate deeper into sandy soils as the soil itself retains little water.

Withered plants can be found where there is no further moisture after emergence. The risk is greatest when there is no compaction and no fine soil, as the seedbed becomes too cloddy under the drier conditions. Therefore, it is important not to form clumps during tillage, and to break these down immediately while the soil is still freshly tilled. Dried-out clay and loam clumps are very difficult to break down. During low levels of precipitation, the water remains in the upper few centimetres of soil and does not reach the seeds. Dried-out clay soils also bind the water too strongly so that again, it is not available to the plants.

In  wet soils, fast germination is often limited by the lack of oxygen and slower warming of the soil. Flat sowing (1-2 cm) is advantageous in this case. This also applies to late seeding.

Photo: Where there is good soil structure, direct sowing in the stubble can take place, as long as the straw does not interfere with the process and the seeder has adequate coulter pressure. Here it is important that the seed is placed on the firmer subsoil and that there is sufficient fine earth.

According to the Fertilisation regulations, autumn N-fertilisation is still possible for oilseed rape with cereals as the preceding crop. However, a test should be performed to determine whether it is necessary. Especially in the (potentially) red areas, this must be planned carefully and documented:

The tendency was to apply less N in spring 2019, whether due to drought, the Fertilisation limitations, for cost reasons, or because of good (oilseed rape) autumn biomass.
The good yields of the preceding cereal crop also means more was removed from the soil. At the same time, the rotting straw temporarily binds some N, so it is possible to plan in a small application of 30 kg mineral N if only moderate growth conditions exist up to mid-September. Post-fertilisation is allowed up to 30.09.
It is different in arid sites, where sufficient N still ought to be available, but is not immediately available due to the drought. No deficiency is expected after moisture penetration of the soil. If there is an N demand, then post-fertilisation is still possible up to 30.09.
The use of organic fertiliser probably reaches the max. 30/60 kg N/ha allowed by the Fertilisation Ordinance. A well-developed oilseed rape crop is able to fully utilise this amount of N and can take up over 100 kg N/ha as seen in autumn 2018. Accordingly, the spring fertilisation in 2019 was reduced to 140 kg N/ha in many cases.

Conclusion: The yields on many farms were not as good as expected, but were still ok considering the challenges during the vegetation period. Problems tend to be more in the area of production costs if several treatments were required. However, here too, some regions had considerably lower pest pressure. Savings could be made in both the fungicide and N-fertilisation areas. Oilseed rape has unique and enormous potential, because – along with the grain yield – the additionally calculated oil yield is its trump card.

The oilseed rape harvests have been lower than analysts predicted throughout the whole of Europe, but demand exists from processors and palm oil is becoming scarcer. This has not yet been sufficiently factored into price developments.

The seeding conditions are better than last year – not everywhere, but at least where the volunteer cereals and volunteer oilseed rape are emerging after stubble cultivation. After reaching a peak of over 1.5 million ha, oilseed rape cultivation has declined over the years, and seeding fell to below 1 million ha for the first time in 2018. This means the level of cultivation within the crop rotations on most farms is not within the critical range.

Summary: The glass is (at least) half full.