Published article by RAPOOL CZ with some small adaptations regarding translation and additional data: https://www.rapool.cz/index.cfm/nav/413/article/4882.html

This year's winter rapeseed sowing is already the seventh year in which growers cannot use insecticide seed treatment (Neonicotinoids) with the active substances thiamethoxam, imidacloprid and clothianidin. The use of neonicotinoid treatments has been banned by the European Commission due to concerns about harm of bees. Looking back to the past vegetation, the restriction, combined with the extremes of the weather, has brought considerable difficulties in protecting young rapeseed crops from autumn pests. The increase of insecticide foliar applications has a negative effect on both: the ecology and the economy of cultivation rapeseed, and in this way the grower has no chance to protect the roots from larvae of cabbage root fly, flea beetles, wireworms and other soil pests.

As a result, additionally the pressure of soil fungal diseases like Verticillium is growing.  RAPOOL is sensitive to these changes and constantly looking for new solutions. Our  breeding department is looking now for a faster growth and on top for a better general plant health to increase in this way the yield stability of our varieties.

The speed of plant development plays an important role

One way of indirect protection is the growth rate of young plants. The rapid formation of roots and leaves also gives rapeseed hybrids a higher compensation capacity. The ability to fill empty spaces will be appreciated by every grower, as in practice there are quite well-known situations where it is necessary to thicken the canopy after an unfavorable autumn respectively winter, or damaged by pests.

The differences are visible

Higher vitality can be observed in some hybrids during germination and emergence. SPZO is collecting since several years the root neck diameter of their varieties tested in the official POP SPZO “stripe trials”. If we keep in mind, that especially the last years were influenced by different factors (climate stress, several pests in autumn and spring, mild winters, or frost during flowering), a successful establishment in autumn becomes more and more important.

Therefore, the root neck diameter can deliver already a valuable forecast for the yield potential in the following summer, even there exist no statistical proven correlation between both figures. The graph no. 1 is giving an overview for the last 4 years, based on the official scoring of SPZO. 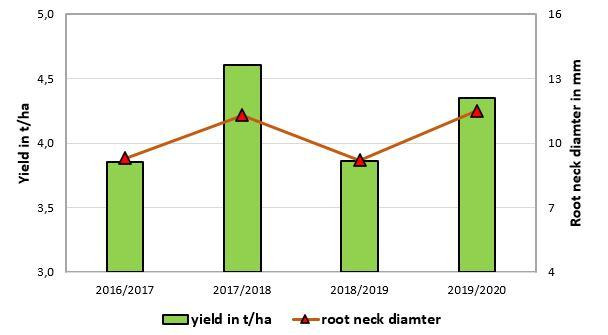 Average yield of POP SPZO sortiment A + B, based on the scoring of the root neck diameter in autumn (in mm)

The hybrids TEMPTATION and ATORA constantly confirm the excellent strength in the initial development of plants. Both varieties present a faster leaf rosette formation and root development (see graphs no. 2 and 4: root neck thicknesses in SPZO experiments, autumn 2019). 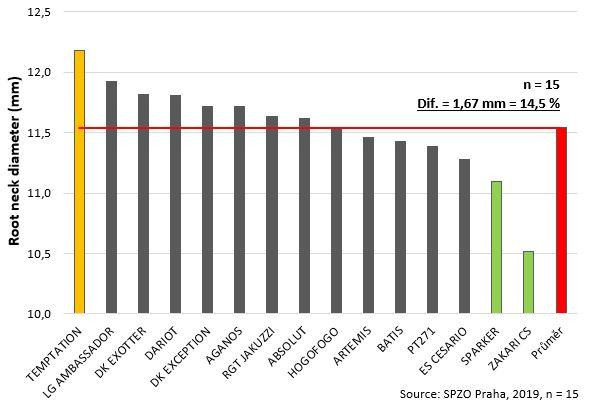 A detailed analysis of the root neck diameter from autumn 2019 connected with the yield figures from harvest 2020 deliver an interesting picture (graph 3). TEMPTATION was able to reach based on the strong root neck diameters again the best yield in the official SPZO trials sortiment B with 107 % rel. yield. Again, an outstanding performance and promising confirmation of the yield figures of 2019 (SPZO sortiment A with 109 % rel. yield). The focus of the RAPOOL breeding for a successful establishment based on the rate of growth of the main root and the growth of the root mass in general. The vital plants of TEMPTATION and ATORA develop rich leaf roses and strong spherical roots with a distinctive zone of lateral roots and root hairs. Interesting is, that TEMPTATION convince next to a strong establishment in the field also with a secure leaf rosette flat on the ground. Based on this fact we can recognize a robust winter hardiness, even we must mention, that we did not had stronger winter killing since 2015/2016. Since last autumn the dynamic and rapid development of plants of these hybrids has provided more foundations for the formation of primary branches. Slower entry into the spring vegetation of ATORA increase the compensatory capacity of its canopy also in the case of late sowing.

In addition to Sclerotinia and Phoma, Verticillium has become a limiting disease in the last years, against which direct chemical protection is not sufficiently effective. One of the available and functioning actions is the breeding of more robust hybrids. Again, there are significant differences between the varieties, see Tables 1 and 2.

The main varieties of RAPOOL CZ portfolio TEMPTATION and ATORA convince with a broad robustness against the main diseases in rapeseed. This support also the usage in a tighter crop rotation, where Verticillium can appear more often. A novelty on the market in the field of insecticide treatments is Buteo® start (Bayer) with the active ingredient Flupyradifurone from the group of butenolides. Buteo® start is an insecticide seed treatment designed for sowing rapeseed against damage to germinating plants by Phyllotreta respectively Psylliodes flea beetles. In addition to a stable weather-independent effect, thanks to a new mode of action that has not been used before in other insecticides for the protection of rapeseed, it provides an effective solution against several pests comparable to neonicotinoid treatment.