STANDARD PROCEDURES BELONG TO THE PAST!

Regardsless of whether you have to deal with extremely dry or extremely wet sowing conditions: Thanks to his strip-till procedure of direct seed drilling, Thinus Glitz increases rapeseed yields on his heavy clay soils in Bad Driburg (East Westphalian uplands, Germany).

No soil blending, please: direct seeding and prior subsoiling on heavy soils

In the past eight years, we have tried different tillage strategies in rapeseed cultivation; thanks to a self-designed drilling technique employed within one work step by using direct seeding combined with prior subsoiling, we have consistently managed to establish the best crops, regardless of whether we faced extreme drought like the one we had in 2015, or an extremely wet autumn which we experienced in 2017. This made us decide to invest in an English strip-till seed drill of the brand Mzuri in spring 2018. 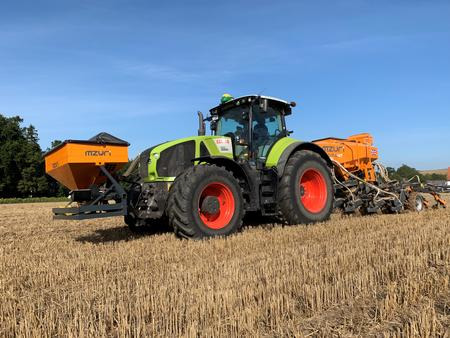 The Mzuri seed drill uses coulter discs to cut harvest residues in front of ripper teeth in every row. These perform subsoiling up to a depth of 25 cm without shifting too much soil material or stirring legacy rapeseed grains up from deeper soil layers.

Our Mzuri seed drill uses coulter discs to cut harvest residues in front of ripper teeth in every row. These perform subsoiling up to a depth of 25 cm without shifting too much soil material or stirring rapeseed legacy grains up from deeper soil layers. Fertilizer is applied after each ripper tooth, i.e.  about 50 kg of ammonium sulphate or diammonium phosphate per hectare, depending on nutrient levels in the soil. Afterwards, a packer roller passes through each row ensuring corresponding soil recompaction in conjunction with the weight of the machine. After each packer roller, there is a follow-up-controlled drill plough with a row spacing of 37 cm E28 to 30 target plants per square metre) to follow. These wide distances between rows have proven successful in rapeseed drilling in our agricultural establishment, and plants show good growth in autumn.

The cultivation procedure: vibrating (jigging) instead of soil blending

Usually, rapeseed is drilled straight into the remaining cereal stubbles without any blending tillage if barley or wheat has been used as preceding crop. As a preparatory step, a Techmagri-Cultimulch straw harroweeder, which provides for an adequate seedling bed and incites the germination of volunteer cereal grains and blackgrass thanks to its laminated spring teeth, passes over the field twice. Any cereals sprouted, as well as legacy rapeseed grains are controlled right before drilling either by applying glyphosate or by using a Kelly chain disc harrow. Around end of September, liquid manure is applied onto the standing crop.

Protection against evaporation is the key to success!

The first rapeseed crop could be evenly drilled by the machine in the extremely dry summer of the year 2018. After performing tillage with a straw harroweeder twice in a row, drilling of rapeseed was conducted straight into the remaining cereal stubbles. With soil temperatures of up to 50 °C, the best crop populations could be observed in those stubble field areas where chopped straw covered the surface and where barley had previously been harvested using high-cut technique.

In those areas where the straw had been removed rapeseed plants were about three weeks behind on its development because there was no isolating protection of the soil against evaporation any more. Despite these difficult circumstances, a consistent crop population could be established, and yields turned out highly satisfactory. Since this first sowing season, our farm has registered continuously rising rapeseed yields (ø 47 dt on 55 hectares in 2020). 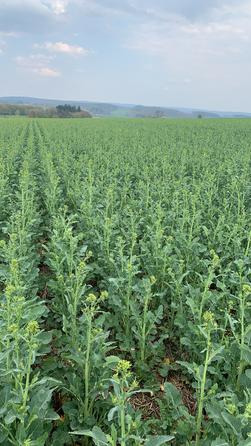 Right before the start of blooming, you can still identify the rows quite clearly. Thus, light can thoroughly penetrate the crop giving the strong individual plants enough time to develop a large number of lateral branches.

Reliably down into the earth: evidentiary root growth!

Thanks to considerably reduced passing over the soils and by combining subsoiling measures and drilling, the roots of rapeseed plants can easily grow downwards. But contrary to the misgivings sensed by many people, the spaces between the rows, which do not undergo direct subsoiling after all, are sufficiently opened up by tender roots. Owing to the harvest residues left behind on the soil surface with every component of crop rotation and thanks to consistent use of intermediate crops, biological activity in the soil and especially the count of deep-digging earthworms has increased considerably in the past three years.

On the heavy clay soils that we have here, it turned out that even the subsoil could be opened up to a depth of up to one metre by the roots, allowing crops to presevere considerably longer even during dry spells.