Influence of herbicide residues on the development of oilseed rape

A legitimate question, especially when we see such different crop development (picture below). The photo from 31th October 2011 shows an area on which the herbicide “Attribut” (active ingredient: 663.4 g/kg Propoxycarbazone) was used in the previously grown wheat. Conventional oilseed rape was drilled on the left side of the field and Clearfield rapeseed on the right. Attribut is a herbicide for grass control, which appears in the same way in other years like 2003. The cultivation of rapeseed is also excluded after using Attribut in the instructions for use. Clearfield rapeseed is resistant against herbicides like Attribut. So, we can probably assume that the visible difference in growth is due to residues of the herbicide used. 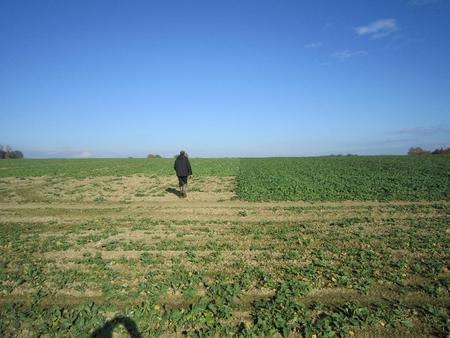 If the influence factors for cultivation are to be evaluated, then the soil moisture comes first. Damages only occurred under dry conditions. This is followed by the application date. This was analyzed and presented by trials of DuPont. The influence of the active ingredient metsulfuron-methyl, which was used in cereals in spring of the running year, was evaluated in the following grown rapeseed (see Table 1). Severe damages in the form of reduced growth and lightening could be scored only in the late applications. So, it is obviously not the case that the larger, soil-shielding cereal canopy compensates for the disadvantage of the late application.

Third, there is the influence of the soil. Active ingredients such as propoxycarbazone-sodium are decomposed by the chemical process hydrolysis. This process is significantly slowed down in soils with high pH values, which have a low proportion of free hydrogen (H+) ions. This can also be seen from the evaluation in Table 1. At locations with pH values ​​below 6.5 there was no relevant damage from the use of products containing Metsulfuron-Methyl. Besides this chemical one, there is also a biological influence. Moisture is also required for a microbial decomposition. If the way up of water from deeper soil layers is interrupted due to structural damage, the decomposition of the active substance is also interrupted. The type of soil, the crumb structure and the humus content also have an influence. Humus is used, among other things, as feed for soil organisms that are involved in the decomposition of active substances. Furthermore, active ingredients are bound to humus.

Factors that increase the risk of herbicide damage from ALS inhibitors:

How big is the problem?

Severe damage can often be attributed to the herbicide Attribut. But Attribut has a low market share in Germany. It is even rarer that rapeseed is grown after the use of Attribut. In comparison, if you take the area that is treated with “Atlantis products” (basic ingredient: Mesosulfuron) every year, these combinations of active ingredients are obviously less critical. There are enough opportunities to see corresponding differences between both products. Through border treatments, overlapping areas or through wanted and unwanted spray windows. What about invisible damages? In the years 2011-2013, among others in North Rhine-Westphalia, Clearfield varieties were compared with conventional varieties at different locations. Among the 4 Clearfield varieties there were 2 with the latest genetics, the yield potential of which was at least on the level of the best conventional hybrids of the time. The cultivation also takes place after winter wheat and also after the use of e.g. Atlantis WG (active ingredient: 29.2g/kg Mesosulfuron, 5.6g/kg Iodosulfuron, dosage: 400 - 500 g/ha). Relevant yield differences could not be measured in our experiments.

When evaluating harvest surveys, the constant that can be used to explain differences in yield is the share of rapeseed in the crop rotation. Herbicide residues have so far not emerged as a major yield factor.

However, it is also clear that in the autumns of 2018 and 2019, especially after vegetation periods with low rainfall, influences of herbicide treatments on the autumn development of rapeseed were seen more frequently. The impact was less than expected, but the problem has become visible. Long dry periods in the spring and summer months will probably not remain the exception. In order to keep the risk of damages on the following crop as low as possible, it is certainly not a mistake to adapt the herbicide applications. The following points are options.

2. Carry out treatments as early as possible

If the above-mentioned alternatives are no longer effective (usually against black grass (Alopecurus myosuroides)), Atlantis Flex (active ingredients: 90 g/kg Mefenpyr + 67.5 g/kg Propoxycarbazone + 43.8 g/kg Mesosulfuron), Niantic (active ingredients: 86.6 g/kg Mefenpyr + 5.6 g/kg Iodosulfuron + 29.2 g/kg Mesosulfuron), or Atlantis OD (active ingredients: 1.86 g/l Iodosulfuron + 9.72 g/l Mesosulfuron) on drained areas should be used as early as possible. In vigorous conditions, in warmer lowlands, already in January. Due to the mild winters of recent years, the grasses grow without a break. The bigger they get, the less chances of safe control become. It can be observed that for this reason more treatments will be carried out in autumn. In addition, there is enough time for the active ingredient to decompose.

You know that from Viola arvensis and Veronica persica. In contrast to spring, they are very easy to control in autumn. Anthriscus caucalis (problem weed, also more ALS-resistant) can be controlled in autumn with Chlortoluron (1250 g/ha) or with the herbicide Zypar (product from Arylex™ active family with active ingredients: 6.25 g/l Halauxifen-methyl + 5 g/l Florasulam +  3.95 g/l Cloquintocet). In the spring, however, there are mostly only ALS inhibitors for controlling Anthriscus caucalis. Often the treatments are late, as hotspots of infestation in the field are recognized only with growth regulator or fungicide treatments. If treatments are required in spring, they should preferably work with Refine Extra (active ingredients: 320 g/kg Thifensulfuron + 160 g/kg Tribenuron) or Potacur (active ingredients: 241.15 g/kg Tribenuron + 240.3 g/kg Thifensulfuron). The half-life value is smaller than that of products based on Metsulfuron-Methyl.

The last point is ultimately the most important. This is a long-term approach. While in the short term, the risk of damage on the following crop is greatly reduced by plowing or intensive mixing, but a sustainable conservation tillage with focus on a higher soil fertility can be in long-term perspective even better.

In this article, only a possible, negative influence of ALS inhibitors on the following oilseed rape was discussed. However, damage caused by soil herbicides with active ingredient Diflufenican cannot be excluded, especially on sandy, humus-poor locations. This can usually be observed on dicotyledonous catch crops because rapeseed is usually rarely grown on these areas. The half-life value of Diflufenican is stated on the page of the INTERNATIONAL UNION OF PURE AND APPLIED CHEMISTRY (IUPAC) - Jan. 2021 as follows.

Mean DT50 in the laboratory (at 20° C): 95 days (minimum value 41, maximum value 318 days). Pendimethalin is on a similar level. The active ingredients Flufenacet (e.g. Cadou SC) and Prosulfocarb (e.g. Boxer) are less persistent in comparison. The DT50 value of Flufenacet is shown in the cited source with 20 days, that of Prosulfocarb with 12 days.

The investigation of a practice field (light soil) for herbicide residues resulted in the following: After the use of flufenacet, Diflufenican and Chlortoluron in autumn 2019, a soil sample was taken from a depth of 0-10 cm from the particularly light, humus-poor areas of the field in autumn 2020 and analyzed. There were 29 g/ha of Diflufenican and 14 g/ha of Chlortoluron. In relation to the applied amount of active ingredient, 24% of the amount of Diflufenican and 4% of the amount of Chlortoluron were still present in the soil. Flufenacet was not included in the pool of active ingredients that are tested as standard. This aspect should also be taken into account when measuring application rates. For weed control with medium sowing dates, 60 g/ha of Diflufenican is sufficient in autumn. In spring, on weak locations, herbicides containing Diflufenican should be avoided.